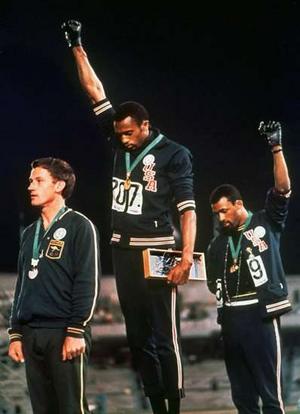 It’s one of the most powerful images of our time.

The photo shows Tommie Smith and John Carlos, the gold and bronze medalists in the men’s 200 metre race at the 1968 Mexico City Summer Olympic Games, taking their places on the podium for the medal ceremony barefooted and wearing civil rights badges. Both men lowered their heads and each defiantly raised a black gloved fist as the Star Spangled Banner was played. Both of them were members of the Olympic Project for Human Rights.

What isn’t as well recognised is that Peter Norman, the Australian sprinter who came second in the 200 metres race, also wore an Olympic Project for Human Rights badge at the games and on the podium to show support for the American sprinters.

Salute is a a journey back to the 1960’s and beyond, to tell the real story behind what has now become one of the most famous Olympic moments in history. The writer, producer and director for the film is Matt Norman, Peter Norman’s nephew.

As the release of this film nears and the world protests against China’s civil and human rights atrocities leading up to the 2008 Beijing Olympics, a new generation needs to see how the Olympic games has been part of World politics in the past.

“Salute” has become even more important to showcase to the World that even after 40 years since the Mexico City Olympic games in 1968 we have still learnt NOTHING.

This should be a lesson as this generation watch history repeat itself.

Salute the movie, for the first time, tells the true story of what happened in 1968 by all three athletes Tommie Smith, John Carlos and more importantly the late Peter Norman.

I had the distinct pleasure of speaking to Matt Norman about his film during my radio programme on 98.5 Sonshine FM this morning. Matt talked about his passion to see his uncle recognised for his part in that historic moment. He talked of a man who was committed to doing what was right, even though he knew it would come at a cost and that he was putting himself at risk.

If you’d like to hear more about Peter Norman’s remarkable story, click play on the audio player at the bottom of this post and hear my interview with Matt Norman.

Do you think some of your friends would enjoy reading The Silent Salute? Please use the buttons below to share the post. Thanks.