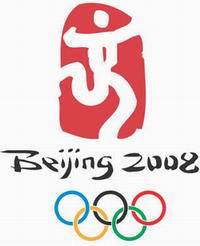 The opening ceremony is in full swing and Olympic Games for 2008 are finally underway.

In the coming days the best of the best will be representing their countries and competing for gold.

I must admit that I’ve never really been a competitive sports person. I’ve won a sprint or two against friends during our casual Saturday morning bike ride but I don’t think that counts. I’ve certainly cycled long distances including five times across Australia as well as a couple of cycling trips in India and one in Canada, but I wasn’t actually competing against the other cyclists who rode with me.

I’ve also played a bit of squash over the years and even though I’m not great, when I play, I do play to win. (Not that I’m always successful in my endeavours.)

Have you ever been involved in competitive sports? Do you have medals and trophies from your younger years? What is your greatest sporting moment?

I reckon the closest I ever got to sporting greatness was getting a green ribbon for third place in the sack race back at Wembley Downs Primary School when I was in about grade one or two.

Do you think some of your friends would enjoy reading What's your greatest sporting moment?? Please use the buttons below to share the post. Thanks.

There is only one Jeep
I'm sorry … I'll read that again