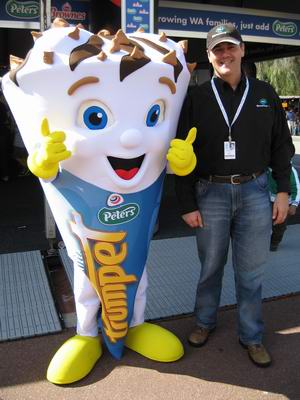 I’m not convinced that I could eat an ice cream that size all at once … but I’d give it a fairly good try.

I’m about to head off for my third day at this year’s Perth Royal Show. It’s day four of the show but I had Sunday off. I’m broadcasting my radio programme on 98.5 Sonshine FM from the show all week.

I may get a little damp on my ride today. There are a few showers about but I’m hoping I won’t arrive too soggy. The ride distance more than triples my regular daily commuting distance so I’m loving the extra cycling.

The broadcast has been fun so far with lots to see and talk about and it’s a welcome change from sitting inside a studio.

We’re broadcasting from a caravan just up the hill from sideshow alley and so we’re getting a lot of passing people traffic. If you’re heading to the show this week make sure you drop in and say hello. This Perth Royal Show map shows you exactly where to find us.

Do you think some of your friends would enjoy reading The show continues? Please use the buttons below to share the post. Thanks. 🙂 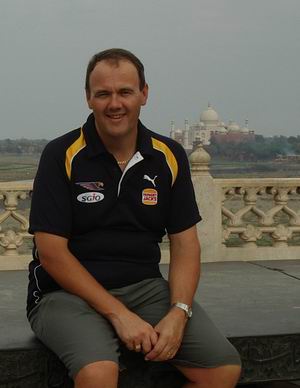 This is a photo of me during a rest day on my most recent Bike for Bibles ride. It was in India back in 2005 and I’m sitting on the throne of Jahangir at Agra’s Red Fort. Over my shoulder you can see the Taj Mahal.

The throne of Jahangir was built in 1602. They sure don’t make seats to last like that anymore.

I’ve had some amazing experiences through Bike for Bibles and cycled many thousands of kilometres. My involvement started way back in 1987 with the first-ever Bike for Bibles crossing of Australia. I’ve cycled from Perth to Canberra twice, Perth to Adelaide, Perth to Sydney and Perth to Hobart as well as taking part in many rides within Western Australia.

I’ve also been overseas with Bike for Bibles on three occasions. The first time was in 1992 for the first ever Canadian Bike for Bibles. We cycled through the Rockies and it was absolutely magnificent. I battled Indian traffic in 2003 and 2005 for Bike for Bibles and would go back there tomorrow if I could.

From August 1999 to August 2004 I served as the Western Australian Bike for Bibles Coordinator for the Bible Society. After my five years service there I returned to radio.

I had the opportunity to combine my love of Bike for Bibles and radio this morning when I interviewed David Pascoe about an upcoming ride from Perth to Albany. You can find the details of the ride at the Bike for Bibles blog or click play on the audio player in this post to hear what David had to say.

Do you think some of your friends would enjoy reading Bike for Bibles 2008? Please use the buttons below to share the post. Thanks. 🙂

I’ll have something here for you to read later.

Until then, you should be reading Father Bob Maguire’s post School Holidays.

Do you think some of your friends would enjoy reading More wisdom from Father Bob? Please use the buttons below to share the post. Thanks. 🙂

It all gets underway this Saturday.

The Perth Royal Show begins at the Claremont Showgrounds from this Saturday the 27th of September until Saturday the 4th of October.

The Perth Royal Show is Perth’s biggest community event attracting 400 000 visitors from the city and the country every year. It has a history spanning 170 years and serves to showcase WA agriculture, small business and entertainment.

98.5 Sonshine FM will broadcast live from the show each day.

I’m really looking forward to presenting my morning programme from the show each day of next week as well as hosting both Saturday mornings.

I’ll have a range of interesting guests and will probably get involved in some weird situations. I may even end up broadcasting from the bumper cars, from the top of the ferris wheel or some other sideshow ride.

If you’re thinking of heading to the show this year, make sure you drop in to our broadcast caravan and say hello. We’ll be just up the hill from Sideshow Alley, across the road from the Cat Pavillion. Click on our Perth Royal Show map to see where to find us.

Do you think some of your friends would enjoy reading Perth Royal Show 2008? Please use the buttons below to share the post. Thanks. 🙂

The WA symphony Orchestra launched their 2009 Season at the Perth Concert Hall on Monday night.

Conductor Paul Daniel led the orchestra through some wonderful pieces including an excerpt from an amazing piece of music by Peter Sculthorpe, named Kakadu, which draws its inspiration from Kakadu National Park.

The evening began with the well known opening theme from 2001: A Space Odyssey. There were pices from Beethoven, Stravinsky and so much more. The WASO Chorus joined in too with an amazing rendition of the Hallelujah chorus.

There’s something quite amazing about hearing and watching an orchestra in full flight. I’m always amazed at how all the different instruments fit together so well.

As well as the various classical concerts scheduled for the 2009 Season, WASO will be supporting artists such as Roberta Flack, Human Nature and Ben Lee. The orchestra is truly committed to taking their music to a very wide audience. I saw them backing Glen Campbell earlier this year in an incredible concert.

If the preview they gave us of the 2009 Season is any indication it’ll be an amazing season.

Do you think some of your friends would enjoy reading WASO 2009? Please use the buttons below to share the post. Thanks. 🙂