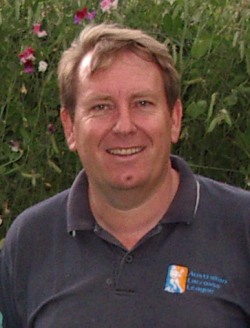 Words really don’t come close to describing how I feel right now. On Friday night this world lost a generous, caring man who I was privileged enough to call friend.

Mark Simpfendorfer left this world for a better place following a massive heart attack. He was a director and producer working in film, television and corporate video. His 3D IMAX movie, Red Crabs: Australia’s Christmas Island, is set for release later this year.

My head is full of thoughts that race through my mind, only stopping for an instant before continuing on their journey. Thoughts jump between what was, what could have been and what the future looks like without Mark. I really haven’t slept well over the past couple of nights as my mind keeps racing and trying to come to terms with what has happened. My heart aches for his family, especially his four children, for other friends and for the friendship I’ve lost.

Mark was there for some of my most memorable life experiences. We travelled half way across Australia together in 2003 as he videoed a team of cyclists I was leading on a marathon fund raising ride from Perth to Hobart. He later created a short documentary on the ride that was shown on Australian Christian Channel.

Earlier in 2003 we had travelled to India together. Mark was there to capture my ride from Agra, home of the Taj Mahal, to Delhi. It was an amazing experience for both of us. Neither of us really knew what to expect when we set off for India but we loved our time there and were more than happy to return two years later with a small team of Aussie cyclists. We were talking about returning next year around the time of the Commonwealth Games in Delhi.

The last time I saw Mark was at our new home just a couple of weeks ago. He dropped in to capture some video for a project he was completing and we shared a Limca, the lemon lime drink that we enjoyed so much in India. Several months ago Pauline had found a shop nearby that imports Limca from India so when I knew that Mark was to visit I made sure there was some ice cold Limca in the fridge.

Mark was also a major part of one of an extremely significant day for Pauline and me. He agreed to video our wedding back in December 1992. The resulting video, as expected, was spectacular.

Even though he’d been through some deep waters in recent years, Mark always stayed upbeat and optimistic. In many ways things were looking up for him and he had such great plans for the future.

Mark’s legacy will live on in his remarkable children.

He taught me a lot about life through what he said and especially the way he lived. I know that I certainly won’t be the only one who will miss Mark. He was a great friend and I look forward to catching up with him when my time comes to leave this life.

Do you think some of your friends would enjoy reading Mark Simpfendorfer 1964 – 2009? Please use the buttons below to share the post. Thanks.