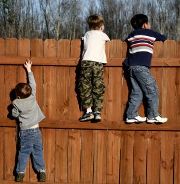 Do you know who’s on the other side of your fence?

We don’t seem to chat across the fence or drop in next door for a cup of sugar anymore, but does that mean we’ve lost a sense of neighbourhood. It would seem the answer is yes … and no.

Researchers are saying that while we may not interact with those living in our own street we’ve simply shifted from suburbia to the office. We’re being told that the people we see each day in our workplace have become our new neighbours.

OFFICES are replacing traditional neighbourhoods as people prefer to befriend co-workers instead of those living down the street and busy careers limit opportunities for socialising.

KPMG demographer Bernard Salt said many people opted to talk to their workmates across the office partition rather than chat to their neighbours over the fence. – News.com.au

We’ve only been in our current house for about five months and we haven’t got to know our neighbours very well but we have introduced ourselves to the people either side of us and we wave a cheery hello to others in the street. Still, it’s not quite the same as when I was growing up and we’d wander from house to house with friends in the street.

Do you know the people in your street or do you socialise more with workmates?

A recent survey of 2100 Australian households for NRMA Insurance found nearly half the population never or rarely spoke to their neighbours.

A third of people said they were too busy to get to know the people over the fence and just one in five knew all of their neighbours’ names, the poll found. – News.com.au

Have we lost something by changing our ‘neighbourhood’? It’s great to have healthy friendships with the people we see each day at work but knowing that you can depend on those in your street and that they can rely on you to watch out for their interests is something that workplace friendships can’t replace.

If you had an emergency at home could you call on the person next door? Do they know that they can call on you if they need help?

Socialising with workmates means we’re more likely to have common interests, after all we work in the same industry, but I wonder if that means that we lose the diversity of connecting with people from quite different waks of life.

What’s your idea of neighbourhood? I’d really appreciate your thoughts. Please leave a comment or two.

Do you think some of your friends would enjoy reading Who are our new neighbours?? Please use the buttons below to share the post. Thanks.