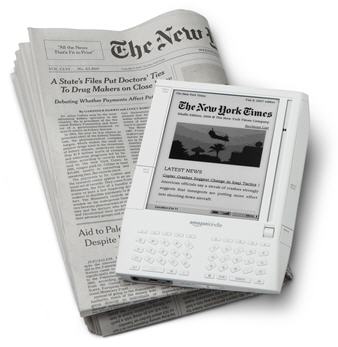 I wonder how much easier moving house would be if we had a couple of Kindles instead of a few bookcases full of books.

Even though I don’t get to do nearly enough of it, I love reading. I enjoy grabbing a book and a coffee and sprawling out on a couch to disappear into another world as I leaf through the pages.

I’m not entirely convinced that the Kindle would give the same experience as a book but I know it’d be easier to move your library from one place to another.

If you haven’t heard of the kindle before, it’s Amazon’s

wireless electronic book. It’s kind of like an iPod for books. It’ll hold a couple of hundred books, magazines and newspapers and is said to read just like a book. The big news for them at the moment is that Oprah has jumped on board and named it as her new favourite gadget. That should move sales along nicely.

Unfortunately they haven’t made them available in Australia yet so I guess we’ll just have to pack all our books into boxes and move them the old fashioned way.

Do you think some of your friends would enjoy reading Making the move with a Kindle? Please use the buttons below to share the post. Thanks.

They’re only selling in the U.S. at the moment but I’m sure they’ll be more widely available soon.

is a brilliant idea for those who like to have reading material at hand wherever they go. If you want a demonstration of the device you can see a video at the Amazon Kindle webpage

They say that it’ll hold up to 200 books. That’d keep me going for a while. You can also download blogs, newspapers and magazines to read wherever you are.

Amazon Kindle is an electronic book (e-book) service launched in the United States by Amazon.com in November 2007. It uses an electronic paper display, reads the proprietary Kindle (AZW) format, and downloads content over Amazon Whispernet, which uses the Sprint EVDO network. This means that unlike previously existing e-book readers, the Kindle can be used without the need for a computer. Whispernet is accessible through Kindle without any fee. On the release day, the Kindle store had more than 88,000 digital titles available for download. The Kindle sold out in five and a half hours. – Wikipedia.org

I’m going on a long flight in April next year (more on that soon) and this would be very handy.

Do you think it’ll catch on? Obviously there is no shortage of people willing to give it a try.

Do you think some of your friends would enjoy reading Amazon Kindle? Please use the buttons below to share the post. Thanks.