It’s almost a cliche, the comedian who is secretly battling depression, the person who makes everyone else laugh, but who is fighting their own inner struggles. Dave Ebert has a passion for comedy, but the laughs haven’t always been easy for him. He has faced a very real battle with depression and suicidal thoughts.

Dave is someone who has turned comedy from something that masked his own pain, into something that brings healing for others, including women released from sex trafficking.

In the latest episode of Bleeding Daylight we get to explore a little of the inner conflicts that Dave has faced over the years and the way that life is now so very different for him.

You can hear his story by searching for Bleeding Daylight wherever you find podcasts, or listen using the player below.

Do you think some of your friends would enjoy reading Dave Ebert – Tears of a Clown? Please use the buttons below to share the post. Thanks. 🙂

This is one of a regular series of articles highlighting some of the music that has played a part in my life.

You’ll find a range of songs from old to new. You’ll probably find music that has been part of the soundtrack of your life too.

You can also check out some of the other songs that make up the soundtrack of my life.

“Farewell Aunty Jack” was the closing theme to The Aunty Jack Show, played at the end of each episode. It was re-recorded and released as a hit single in late 1973 and spent 3 weeks at number one in the charts in Australia in March 1974. The music was written by Rory O’Donoghue, who also did the singing as the character “Thin Arthur”, whereas “Aunty Jack” (Grahame Bond) provided wise-cracks and other spoken commentary to the lyrics, addressed to the listener and the singer. – Wiki

I had the pleasure of interviewing Grahame Bond when I worked in radio and then meeting Grahame and Rory after the show when they toured The Aunty Jack Show and Tell in 2006.

I’d encourage you to get involved too. Let me know about some of the songs that are etched in your mind. What are the tunes that bring back a flood of memories every time their opening notes start cranking out on your stereo? Are there songs you love for their music and others that speak deeply through their lyrics?

Do you think some of your friends would enjoy reading Soundtrack of My Life – Farewell Aunty Jack? Please use the buttons below to share the post. Thanks. 🙂

I’ve got a confession to make. I don’t like your children quite as much as I love mine.

That means that at times I’ve been to concerts of various kinds where my kids are involved and I’ve been thrilled to see what Emily and James have done … but after endless performances by other people’s children I’ve sometimes had a secret wish that the earth would open up and swallow me. It’s not that the other children aren’t good at what they’ve done, it’s just that I haven’t had the same level of interest that I’ve had in my own children.

I thought last night would be a bit like that. We went to see Sinbad the Sailor, performed by the students of Thornlie Christian College. Emily had a part right at the start of the production. When the curtains opened there she was, centre stage. She delivered her lines so very well but once her part was over I thought my mind would start to wander. No chance. The performance was so funny and engaging that I was a little disappointed when it was all over.

The acting skills were outstanding and drama teacher Chris Willesee, the director, has every reason to be very pleased with what his team was able to achieve.

The second and final show is on tonight at the Don Russell Performing Arts Centre and I’m told that there are still tickets available. Mind you, there are a few less tickets available than there was a short time ago. After seeing how wonderful the show was last night we’ve booked tickets for tonight’s show too.

Do you think some of your friends would enjoy reading Sinbad the Sailor? Please use the buttons below to share the post. Thanks. 🙂 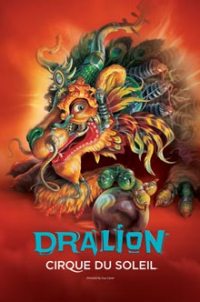 Pauline and I were privileged to be guests at the opening night of Cirque du Soleil’s Dralion last night. It’s difficult to judge the Cirque du Soleil shows against each other but I think that Dralion was my favourite of the three shows I’ve seen.

It’s hard to believe that the human body can bend into so many different shapes. I reckon that I could probably force my body to bend like that if I had my skeleton removed. The performers were absolutely amazing.

I must say that while it would have been great for Emily and James to come with us last night I’m kind of glad they didn’t. If they saw some of the acrobatics the performers were able to do on trampolines I’d be in a constant state of worry that they were in the back yard trying them on our trampoline.

Apart from the athleticism I don’t think I’ve laughed so much for a long time. There’s so much humour throughout the show it’s almost a comedy at times.

The action is so fast that I reckon that even if you went a couple of times you’d still miss bits and pieces. We get so spoiled in this TV age don’t we? Have you ever found yourself wanting to freeze frame a real life moment or watch something you’ve just seen again in slow motion? Wouldn’t it be wonderful if our brains were all fitted with hard drive recorders? I guess they are in a way … that’s where memory comes in to play … but sometimes it’d be great to see things again. I felt a bit that way watching Dralion. There were times when it would have been good to be able to rewind and slow the action down a bit. Seeing people jumping higher than should be humanly possible and then sliding through tiny metal rings high in the air looks like a brilliant illusion but it’s all happening for real and it’d be wonderful to slow things down and see it all happen again. I guess that’s why they produce DVDs of the show.

The costumes and the set were incredible and gave the performance a wonderful sense of the surreal. It all combines to transport you to another world.

After the show we were privileged to be invited to the ‘After Party’ with the cast of the show and a selection of ‘Perthonalities’. It was a magnificent event and the perfect way to cap off an amazing evening.

If you get the chance to go and see Dralion make sure you grab it with both hands.

Do you think some of your friends would enjoy reading Dralion – Cirque du Soleil back in Perth? Please use the buttons below to share the post. Thanks. 🙂 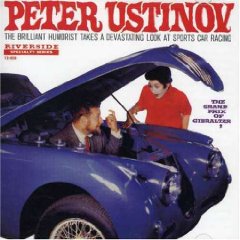 . I was somewhere in country Western Australia and I heard it on a country radio station. I remember being amazed by it back then and forever after searching for the album (you remember those big black vinyl things) in the comedy section of every record shop I’d visit.

I listened all the way through absolutely glued to the car radio as I heard a most hilarious calling of a motor race. There were race callers, drivers and all sorts of other people involved in the extremely funny parody of a race call. I was even more amazed once the album finished and the announcer mentioned that it was Peter Ustinov doing all the voices and all but one of the sound effects.

As well as looking in record shops over the years, I’ve tried to search for the recording online every now and then. Nothing. Then today I searched again to find that while I may never find it on vinyl, it’s now available on CD, which is even better.

Just for a second imagine there is a race around the rock of Gibraltar… and that we’re back in the 50s when racing cars still looked like cars. Well, sort of.  That was Peter Ustinov’s fabulous idea as he went into a Manhattan studio to record this gem. He finished it in one day, without script.

One day … without a script. The guy was a genius.

I had the pleasure of seeing Sir Peter Ustinov live twice at the Perth Concert Hall, several years apart. Both times he was absolutely captivating as he just stood or sat and told stories. He had the amazing ability to bring stories to life and I would have sat hours longer just to hear more of his wit and story telling. The Concert Hall was full on both occasions yet both times he made it feel like I was spending an evening chatting with an old friend.

I’d love to sit here and tell you more about Ustinov’s amazing talents but I’m off to order my copy of the CD. I suggest you do the same.

Do you think some of your friends would enjoy reading The Grand Prix of Gibraltar? Please use the buttons below to share the post. Thanks. 🙂