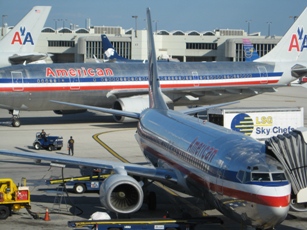 I see that Perth Airport is going to get a pretty big make over. Eventually the domestic and international airports will be merged so that people won’t have to make a panicked dash from one terminal to the other to make their connecting flight.

It’d be nice if they did something similar in Sydney so that you didn’t have to pay five dollars for a bumpy bus trip from one to the other.

I’ve spent a bit of time in airports recently and I can suggest a couple of things they might want to keep in mind.

The first thing is clocks. I’m amazed at the lack of clocks in most airports. You’re there to catch a flight which leaves at a pre-determined time, yet there are hardly any clocks to tell you if you’re running on time or not.

Even if you’ve got a watch you’re very likely to have just flown in from a different time zone rendering your watch fairly useless. I was impressed at Miami Airport. They gave regular P.A. announcements to remind travellers of the local time. A great idea but a few extra clocks would make things even better.

My watch battery died on the trip from Miami to Los Angeles a couple of weeks ago so it wasn’t a lot of fun trying to work out if I was running early, late, or on time.

I guess one other thing they might like to look at is making the air-conditioning constant throughout the terminal. I’ve been to airports where you can go from stuffy and warm to icy cold within metres.

I’ve got a few other ideas but I’d like to hear your thoughts. What would you suggest to a company about to build a brand new airport? What have you found lacking at airports? What do you like about airports?

Do you think some of your friends would enjoy reading Got the time?? Please use the buttons below to share the post. Thanks.