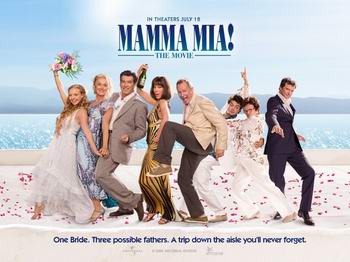 It really wasn’t all that cool to admit to being an ABBA fan back in their heyday but I didn’t care about cool. I had posters and all sorts of other ABBA paraphernalia sticky taped to my bedroom wall, totally destroying the paint job. I would stare endlessly at Bjorn, Benny, Frida and especially Anna, while wearing my trendy yellow ABBA T-Shirt. I even had a certificate to prove that I was an official member of the ABBA fan club issued by the now defunct Perth newspaper, Sunday Independent.

Mamma Mia! is being promoted as a feel good movie and that’s exactly what it is. The joyous, and sometimes tuneful, renditions of many of ABBA’s great songs really brought the audience to life. Most of the cast admirably demonstrated why they had chosen acting over singing as a career. While I would never buy the movie soundtrack, let’s face it, I have the ABBA CDs and they do it so much better, I have to recognise the fact that some of the actors put in amazing vocal performances.

Meryl Streep is a far better actor than singer but she still knows how to belt out a tune and her performance of The Winner Takes It All is remarkable. Many people have singled out Pierce Brosnan’s performances as less than inspiring but I reckon it was a gutsy effort by him and he holds a tune more than well enough for a light hearted movie like this one. It was Christine Baranski who really surprised me with her voice. I think she’s a great actress and her voice was surprisingly good.

If you’re an ABBA fan you’ll enjoy the fun numbers and no matter who you are you’re likely to love the scenery.

As for the storyline, and I use that term rather loosely, it’s fairly obvious that the stage show, which the movie closely mirrors, was written only as a way to string together a bunch of songs by everyone’s favourite Swedish super group. (I had to use the ‘Swedish super group’ cliche sooner or later.) I’ll let you decide for yourself about the morality of a story about a girl who has no idea who her father is because her mother had been with three guys within a very short time.

An interesting moment is where the daughter blurts out in front of a group of people that she didn’t care if her mother had slept with hundreds of guys. The mother looks nervously to the crowd saying that she hadn’t slept with hundreds of men. Obviously it would be embarrassing to sleep with too many men but how many would be too many? It seems that sleeping with three guys is OK but hundreds is a little over the top. I wonder where the line would have been drawn. Five? Ten? Twenty? Fifty?

If you’re prepared to look past the storyline and just enjoy the movie as an opportunity to relive your love of ABBA, go for it.

Do you think some of your friends would enjoy reading Mamma Mia … Here We Go Again? Please use the buttons below to share the post. Thanks.