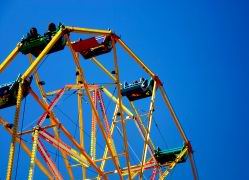 We’ve had a great response for the carnival this week with over thirty entries. It’s wonderful to see some first timers joining the carnival as well as some of the regulars at their thought provoking best.

The weekly Christian Carnival is an opportunity for Christian blog writers to share their best posts from the previous week. The topic of the post doesn’t necessarily have to focus on Christianity but it must reflect a Christian worldview, and the writer must be Christian to qualify.

This is only the second time I’ve hosted the carnival and I must say that it’s a real honour to be able to present such a diverse range of great posts.

Please take the time to read through each post … it’s worth it. You might also like to link to this week’s carnival so that your blog readers can enjoy the variety of styles and thought.

Many people are confused about the love of God. You may have heard people say, “If God loves everyone, why doesn’t he save everyone?” Anthony Delgado says that the answer is a philosophical one, stemming from scriptural knowledge of God’s plan. Anthony presents Jesus, a Choice posted at eInquisitive | Giving you something productive to think about!.

What’s usually the first thing to be cut from our budget when we have to tighten the belt? FMF presents Why to Keep Tithing in Tough Economic Times at Free Money Finance.

If you want a post that’ll get you thinking check out Heath’s post Our Creator Has A Plan posted at Esprit d’escalier.

Another thought provoking post from JR Madill telling us Why I am not a Calvinist over at Theology for the Masses.

Jason Hughey says that Brett and Alex Harris are sweeping the nation with their message of doing hard things for Christ, regardless of age. With a little Scriptural analysis, we can understand the power of their message. Jason’s post We’ll Fight in the Shade can be found at Logical Consistency.

James Middleton’s Disciple of The Way is one of my regular reads. This time around James presents a post titled Legalism vs Lawlessness – Part 2.

Sarah always has something interesting to say and for this carnival she presents Get On Your Soapbox #9 at This is what Sed said.

Andy Wood at LifeVesting asks us Are You Too “Safe” to be Secure? Andy says that God promises a life of genuine security for His children but those who seek security by hiding behind what is “safe” have no security at all. The premise for his post is that security only comes as a result of bold obedience and courageous faith.

Dean wants you to sit down and enjoy something from the TV show ER as he presents The Flaw in Post Modernism posted at My Jarrol Spot.

Are you tired of waiting? We’re an impatient lot aren’t we. It’ll do us all good to read what Alexis Jacobs says in Best Things Come To Those Who Wait posted at Ramblings From Life.

It’s easy to complain but it does us good to remember just how good we’ve got it. Jill Hart presents Today I’m Thankful For? posted at Christian Work at Home Moms.

We can waste so much time chasing after people who can help us move closer to God, forgetting the opportunity we have to deal directly with Jesus. Yvette Nietzen presents Getting a Direct Power Charge posted at Fresh Wind Ministries, Int´l.

Visual media has strong hidden powers. Are we aware of what we’re allowing into our lives? e-Mom presents 31-Day Media Marathon: Let’s Get Reel posted at C h r y s a l i s.

I love reading what Johnny Brooks has to say. Johhny isn’t just someone who theorizes about faith, he and his family have put themselves on the line to live it. This time around he presents Relevance posted at Pure Christianity.

We can’t escape the world’s biggest sporting event. It’s taken over our TVs, Radios and all other forms of media. Are there lessons we can learn from the Olympics? Fanny Tanioes presents The Olympic Dream posted at ? WINNIEL & THE LAUGHING HOUSE ?.

Crystal Nichols has a confession to make but it’s a confession that most of us would admit to if we were honest. Find out what it is as Crystal presents Anger and Patience posted at Christian in the Corporate World.

We had the Four Laws. Now we have the Four Circles. But is the content that should be there, missing as it is in so much of today’s evangelicalsim for our younger people? Diane R presents The Four Circles: A Critique posted at Crossroads: Where Faith and Inquiry Meet.

Richard H. Anderson presents a work in progress with his post Then the High Priest tore his robes over at dokeo kago grapho soi kratistos Theophilos.

Do you believe in guardian angels? Find out what Jo has to say in Meaningful Monday posted at Moodscapes.

Jeremy Pierce presents a look at a few ways Augustine departed from his contemporaries with significance for moral and social thought in Augustine on Civil Government: The Two Cities posted at Parableman.

Are you always looking for the latest gossip to pass on? Maybe you mention it as ‘a prayer point’ but you know you really shouldn’t. Justin Taylor presents Between Two Worlds: Keller and Powlison: Should You Pass on Bad Reports? posted at Between Two Worlds.

Elementaryhistoryteacher presents a post concerning a prayer attributed to Sir Francis Drake and a bit of history regarding him in Disturbed posted at Got Bible?.

Wickle takes the opportunity presented by the John Edwards story to remind us about why the issue matters, and draws on the parable of the talents to explain why we shouldn’t dismiss adultery or simply call it a private matter in the post Thou Shalt Not Commit Adultery at A True Believer’s Blog.

Christy Lockstein presents a beautiful post that reminds us to listen for God’s small voice through small people. Make sure you read Waterwalk posted at Christy’s Book Blog.

Drew Tatusko presents an insightful post about a new kind of camp for young people. He says, “I do not mind the idea of such a camp, but I do think that the fundamental premise by which it is being constructed is false. If they are to critically think about everything, then the very assumptions by which the camp’s ideological premises are constructed should also be questioned.” Find out more by reading Camp Offers Training Ground For Little Skeptics posted at Notes From Off Center.

Isn’t it wonderful to be able to look at something you’ve seen hundreds of times before through fresh eyes? Anthony Delgado presents Parable of the Sower posted at eInquisitive.

Paul once remarked that the Athenians loved to chase knowledge. But in our age of endless information, can we fall prey to the same trap? John gives us some practical advice on the subject in his post The Traps of Being a Knowledge Chaser.

How do we answer those who present that the existence of evil either proves that God doesn’t exist, or isn’t good? John gives some direction in The Problem (?) of Evil — Part I posted at Brain Cramps for God.

If the Biblical Complementarians never use Jesus or early Pauline texts to support their claims, does this bolster the case that Christianity was egalitarian to begin with, but was gradually patriarchized? Henry M Imler invites you to discuss how Jesus was a Biblical complementarian instead of an egalitarian in his post Shower Question of the Day: Jesus and Women posted at Theology for the Masses.

And that’s it for this bumper edition of the Christian Carnival. I hope you’re already thinking about your posts for the next edition which is being hosted at parables of a prodigal world.

Do you think some of your friends would enjoy reading Christian Carnival 237? Please use the buttons below to share the post. Thanks.

The Sneeze that Pleases
An almost perfect Perth weekend