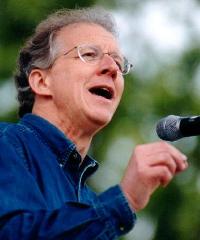 John Piper seems to be beating himself up about an answer he gave at Advance ’09. While I don’t see the problem, I’m glad he decided to explain his position more clearly.

His post, Why I Don’t Have a Television and Rarely Go to Movies, is a thoughtful explanation of why he is very cautious of trivial entertainment for entertainment’s sake. He tackles the issue I touched on in my recent post, Get Naked for Success. He talks about preachers trying to remain relevant by immersing themselves in popular culture through the latest movies.

There are, perhaps, a few extraordinary men who can watch action-packed, suspenseful, sexually explicit films and come away more godly. But there are not many. And I am certainly not one of them.

I’d have to say that I’m not one of them either.

I love Piper’s explanation of why nudity in films is not acceptable.

I have a high tolerance for violence, high tolerance for bad language, and zero tolerance for nudity. There is a reason for these differences. The violence is make-believe. They don’t really mean those bad words. But that lady is really naked, and I am really watching. And somewhere she has a brokenhearted father.

I’ll put it bluntly. The only nude female body a guy should ever lay his eyes on is his wife’s. The few exceptions include doctors, morticians, and fathers changing diapers. “I have made a covenant with my eyes; how then could I gaze at a virgin?” (Job 31:1). What the eyes see really matters. “Everyone who looks at a woman to desire her has already committed adultery with her in his heart” (Matthew 5:28). Better to gouge your eye than go to hell (verse 29).

Whether we like to admit it or not, John Piper is right.

It’s not just sex and nudity in flims and on TV that bother Piper.

But leave sex aside (as if that were possible for fifteen minutes on TV). It’s the unremitting triviality that makes television so deadly. What we desperately need is help to enlarge our capacities to be moved by the immeasurable glories of Christ. Television takes us almost constantly in the opposite direction, lowering, shrinking, and deadening our capacities for worshiping Christ.

Even if you’re not a Christian, you’d have to admit that a lot of television tends to glorify the trivial and that can’t be good for any of us who want to enlarge our vision of the world and what we’re capable of achieving with the precious life we’ve been given.

Do you think some of your friends would enjoy reading John Piper and Television? Please use the buttons below to share the post. Thanks.

A million reasons to smile
Faith and Education