It’s been eight years since the pounding feet and swirling music of Riverdance tapped its way across Australia. Since Riverdance burst onto the world stage it has thrilled millions around the globe.

A national tour opens in Perth tomorrow before heading to Sydney, Melbourne and Brisbane. Since Riverdance began performances in Dublin in 1995, the show has played more than 10,000 performances, been seen live by over 22 million people, played in over 350 venues in 40 countries across 5 continents and played to a global television audience of over 2 billion people.

Riverdance – The Farewell Tour 2011 is set to thrill long time fans as well as new admirers. Today in the studio at 98.5 Sonshine FM I spoke to the two lead dancers of the current tour, Maria Buffini and Padraic Moyles.

They were absolutely delightful and it was a wonderful opportunity to hear about the journey of Riverdance over the years. You can hear our conversation by clicking the play button on the audio player at the bottom of this post.

Riverdance will be at the Burswood Theatre in Perth from the 8th to the 13th of March.

Do you think some of your friends would enjoy reading Riverdance 2011? Please use the buttons below to share the post. Thanks.

The WA Flood Relief Concert starts at 7:00 p.m. this Tuesday the 25th January at the Burswood Theatre.

You can hear Tod Johnston talking about the concert and those who will benefit by clicking the play button on the audio player below.

Everyone involved is donating their time and talents to raise money for the Queensland Flood Appeal as well as helping the victims of the Gascoyne floods and Lake Clifton bushfires.

Tickets are $40 or $45 and available now from Ticketek, or at the door on the night.

Do you think some of your friends would enjoy reading WA Flood Relief Concert? Please use the buttons below to share the post. Thanks.

Four years ago I was blown away by one of the most amazing theatrical shows I’ve ever experienced. It was August 2006 and I was taking Emily out on a dad and daughter date to see The Imperial Ice Stars performing Swan Lake on Ice.

I had visions of the lower area of Burswood Theatre being converted into a huge ice rink. I was quite surprised when we entered the theatre to see that the ice was only covering the regular stage area. The stage is quite sizeable as theatre stages go but how they managed to perform such a spectacular show on such a small area of ice amazed me.

The athleticism, strength and skill was beyond incredible. I find it hard enough to stand up in ice skates but the performers for this show were doing somersaults and all sorts of leaps and jumps.

Not a word was spoken from the stage before, during or after the performance yet the story was told with amazing clarity, skill and humour through the music and the outstanding performances of the cast.

I’m absolutely thrilled that Swan Lake on Ice is back and this time I’ll be taking Pauline and James to see the show.

The Imperial Ice Stars have performed to nearly 3 million people across five continents. The company is a collection of the world’s greatest skaters. The performers between them have won over 250 competition medals. The performance isn’t a ballet on ice; it’s a theatrical masterpiece designed from the ground up to create something that audiences have never before experienced.

Olga Sharutenko performs as Odette in the current production and she joined me in the studio today on 98.5 Sonshine FM.

It was a true delight to speak with Olga and you can hear our conversation by clicking the play button on the audio player at the bottom of this post.

If you ever get the opportunity to see anything by the Imperial Ice Stars, don’t hesitate. You’ll be amazed and you’ll create wonderful memories that will last a lifetime.

For Perth readers, Swan Lake on Ice is being performed at Burswood Theatre from the 13th to the 22nd of August.

Do you think some of your friends would enjoy reading Swan Lake on Ice? Please use the buttons below to share the post. Thanks.

I took Emily and James to Bugs Bunny at the Symphony and after the show the conductor and show’s creator, George Daugherty, invited us backstage for a few minutes. In the picture I’m holding the original Dobro slide guitar that was used in the Looney Tunes cartoons of the 30s and 40s. George even let James have a quick go at making one of the classic Looney Tunes sound effects with the guitar. (Click the photo for a much closer look.)

I wrote about the show a couple of days ago in my post Bugs Bunny at the Symphony. Last night we got to experience it … and oh what an experience.

Bugs Bunny at the Symphony has been described as a spectacular fusion of classic Warner Bros. cartoons projected on the big screen, accompanied by their original scores played live by the West Australian Symphony Orchestra. It didn’t disappoint. The richness of the orchestra combined beautifully with the genious of those early cartoons. George gave the audience an entertaining thumbnail sketch of the cartoons’ history, highlighting the amazing musical talents of those who created the scores of the pieces we experienced.

We were kept entertained by the antics of the world’s most popular Looney Tunes characters including Daffy Duck, Elmer Fudd, Porky Pig, and of course Bugs Bunny, featuring in classics such as What’s Opera, Doc?, The Rabbit of Seville, Long- Haired Hare, A Corny Concerto and many more favourites.

Bugs Bunny at the Symphony was performed at Burswood Theatre three times across Friday and Saturday.

Emmy Award winner George Daugherty has conducted almost every major American symphony orchestra as well as a long list of international ensembles. It was an absolute pleasure to catch up with him after the show. The invite to meet with him came after he was my special guest on 98.5 Sonshine FM several days ago. You can hear our conversation by clicking the play button on the audio player at the bottom of this post.

I do hope that George makes it back to Perth sometime soon.

Do you think some of your friends would enjoy reading Touching History? Please use the buttons below to share the post. Thanks. 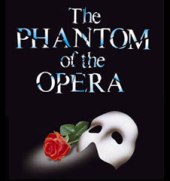 There we were … a couple of guys in suits heading out for a big night at Burswood.

James and I went to see Phantom of the Opera in the Burswood Theatre on Friday. It was a great dad and son evening and it’s amazing how many smiles you get from complete strangers when you’re wandering around with a ten year old who’s so well dressed.

We grabbed something to eat at The Emporium before heading into the show.

I’ve got to admit that within the first ten minutes I was wondering just how much a young boy would enjoy Phantom. I needn’t have worried. He hasn’t stopped raving about it.

He loved the magnificent sets and the great sense of occasion. He loved the pyrotechnics and other effects used throughout the show. Most surprisingly, he wants to get a CD of the music.

Anthony Warlow gave a flawless performance in the title role and the rest of the cast were magnificent.

If you’re looking for a lavish night out, Phantom of the Opera certainly delivers, and while I can’t guarantee that it’ll be every ten year old’s idea of a great night out, it certainly made one young man very happy.

Do you think some of your friends would enjoy reading The Phantom comes to Perth? Please use the buttons below to share the post. Thanks.