RetroRadio is a series of posts of radio interviews from my time working at 98five Sonshine FM covering everything from issues of spirituality to chats with visiting musicians and celebrities.

Hopefully, the interviews spark a few memories and a few thoughts.

It’s always a thrill when you get to meet an Aussie hero. It’s even better when they’re a personal hero too.

I had the honour of chatting with Australian cyclist Cadel Evans just a day or two after he switched to the BMC Team back in 2009.

I asked him who would be runner-up when he won the 2010 Tour de France. Unfortunately, things didn’t go according to plan that year but it was an emphatic win a year later in 2011

is a quietly spoken athlete who was a pleasure to interview. I’ve interviewed hundreds of people but my chat with Cadel will always be a highlight of my time in radio.

You can listen to my radio interview with Cadel by clicking the play button on the audio player at the bottom of this post.

[Note: All RetroRadio interviews on RodneyOlsen.net are a snapshot of the time they were recorded. We all grow and change and so the opinions and thoughts of those in the interviews at the time of recording may or may not necessarily be the same as they are today.]

Do you think some of your friends would enjoy reading RetroRadio – Cadel Evans? Please use the buttons below to share the post. Thanks.

Let’s get the conversation going. I want to know about some of the things you’ve experienced that most others haven’t. What are the unique moments of your life?

I thought I’d try to spark things by listing a few things I’ve done that you probably haven’t.

I’m hoping that you’ll come up with a few of your own in the comments section of this post or that you’ll write a similar post on your own blog or Facebook page and link back here. If you’ve done any of the things on my list let me know.

I’ll just list the ten things and leave it to you. If you have questions about any of the items in the list, feel free to ask.

2. Escaped a country when rioting and looting in the capital became widespread. (Haiti)

4. Stood on stage with Mikhail Gorbachev.

5. Cycled from Agra (home of the Taj Mahal) to Delhi in India.

8. Preached at Cathedral Church of the Redemption in New Delhi, India.

9. Been mentioned at least twice in Australia’s Federal Parliament.

10. Cycled up and down an aisle at K-Mart in Miami, Florida.

So there you are. Now it’s over to you.

Do you think some of your friends would enjoy reading 10 Things You Probably Haven’t Done? Please use the buttons below to share the post. Thanks. 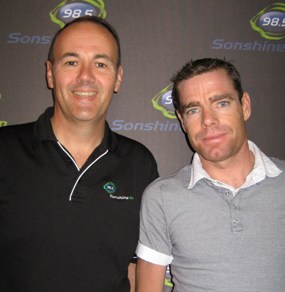 Cadel Evans is set to become the first Australian to win the biggest cycling event on the planet when he rides into Paris later today. After being runner up twice in the past, Evans will be one step higher on the Tour de France podium and at the age of 34, he’ll be the oldest winner in 88 years.

The final day of racing is traditionally a procession into the capital of France to end three weeks of grueling racing.

Cadel ripped the Yellow Jersey off the shoulders of Andy Schleck in yesterday’s time trial with a blistering effort. He missed out on winning the stage by just a few seconds but his effort was more than enough to turn his 57 second deficit to Schleck into a 1 minute 34 second lead.

I had the honor of chatting with Cadel just a day or two after his switch to the BMC Team was announced in 2009. I asked him who would be runner up when he won the 2010 Tour de France. Unfortunately things didn’t go according to plan last year but it will be an emphatic win a year later. Cadel is a quietly spoken athlete who was a pleasure to interview. I’ve interviewed hundreds of people but my chat with Cadel will always be a highlight of my time in radio.

You can listen to my radio interview with Cadel by clicking the play button on the audio player at the bottom of this post.

Lance Armstrong’s success in the world’s most watched annual sporting event helped to increase participation in the sport in the US. I’m sure that Cadel’s success will get more Aussies cycling in the coming years.

Do you think some of your friends would enjoy reading Cadel Wins Tour de France 2011? Please use the buttons below to share the post. Thanks.

It’s the most wonderful time of the year. The 2011 Tour de France begins later today at the Passage du Gois and I’m looking forward to watching another fascinating battle for yellow. Running from Saturday the  2rd to Sunday the 24th of July, the 98th Tour de France will be made up of 21 stages and will cover a total distance of 3,430.5 kilometres. Even finishing the three week event requires a big effort from each of the 198 athletes who will be at the starting line later today.

Controversial three time winner Alberto Contador is looking to take his fourth Tour de France. The Shleck brothers will be there to shake things up with Andy a big hope for the podium. Ivan Basso returns and will be giving it all he’s got. Even Bradley Wiggins has been named as a possible winner and Alexander Vinokourov is sure to throw everything at the race. Personally, I’d love to see Australia’s Cadel Evans finally step onto the podium in Paris wearing yellow. He’s in great form and has a supportive team. I’m really hoping it’s Cadel’s turn.

What do the coloured jerseys mean?

If you have only started following the Tour de France recently and you’ve heard the commentators talking about different coloured jerseys, you might be wondering what all the different colours represent and why it’s so important to be wearing a jersey other than your team jersey.

Each team wears their own uniform but there are a number of special shirts or jerseys awarded each day. While it’s considered very prestigious to wear any of these jerseys throughout the race, it’s obviously even more so to be wearing one of these jerseys after the final sprint down the Champs-Élysées in Paris on the last day of the tour.

Many people know that the Yellow Jersey or Maillot Jaune is the most coveted of all the jerseys but here’s a quick rundown of what it’s all about.

The Yellow Jersey is worn by the leader in the general classification. That means that whoever has the lowest overall time at the end of each stage of the event will be awarded with the Yellow Jersey. It was first awarded in 1919 and its colour was chosen to match the yellow paper of l’Auto magazine, founder of the Tour de France in 1903.

The Green Jersey is given to the leader in the points classification, rewarding the best sprinter. It’s sometimes called the points jersey or sprinters’ jersey. During each stage, points are allocated for several intermediary sprints and for the finish. The jersey was introduced in 1953.

The White Jersey is given to the best rider in the general classification under 25. The jersey was abandoned in 1989 but reintroduced in 1999.

So now you know a little more than you did a short while ago. I hope this brief explanation helps in your enjoyment of this year’s tour.

Do you think some of your friends would enjoy reading Tour de France 2011? Please use the buttons below to share the post. Thanks.

I must admit that if I was badly injured I’d give myself license to take some time off my bike. Cadel Evans doesn’t quite see things that way.

Early in the eighth stage of the 2010 Tour de France Cadel and a number of other riders were involved in a fairly serious crash. Cadel was obviously pretty torn up but he got back on the bike and rode the rest of the tough stage from Station des Rousses to Morzine-Avoriaz which featured two very difficult climbs and an uphill finish. He didn’t just ride it, he excelled to the point that he catapulted himself into the race leader’s yellow jersey. The way he rode on that day caused us all to think that his injuries mustn’t have been as serious as they may have been. We all breathed a sigh of relief.

After the rest day Cadel lined up for the extremely difficult stage nine from Morzine-Avoriaz to Saint-Jean-de-Maurienne. His team mates set the pace for a large part of the stage but on the big climb of the day Cadel lost touch with Schleck and Contador, lost serious time and lost hope of winning the 2010 Tour de France.

What Cadel hadn’t told the public and hadn’t even told his team mates, was that in the fall early on stage eight he had fractured his elbow. Cadel had ridden into yellow on stage eight with a broken arm. He managed to to not only hold it all together on that stage, he excelled. Unfortunately stage nine was a stage too far and too hard for him to stay with riders like Andy Schleck and Alberto Contador who remain in scintillating form.

While Cadel was visibly distraught and in pain at the end of stage nine, he was clearly trying to be philosophical when he wrote his diary later in the day.

Tough old day here….I was hoping to be able to get through today, recover a bit for the Pyrenees and keep fighting. The last 48h had been a bit more taxing than I hoped though; both on the head and the legs. Oh well, that’s racing.

A HUGE thank you to all the BMC boys who showed what they’re made of today. The staff here at the Tour, they didn’t know their leader was starting with broken arm – I didn’t want to demoralize them. And, to everyone who supported me today even though I was way back. On a performance level, it’s obviously not where I want to be, but for everyone involved, this is why we have sport in our lives; to test ourselves at the limits without harming anyone….well, only temporarily….

Tomorrow is another day…

I had truly hoped that 2010 would finally be Cadel’s year to win the Tour de France but it seems that’s not to be, but I can’t help admiring the fact that he always puts in 100% when he races. It must be devastating for him but what a hero.

(You can hear my interview with Cadel Evans from November last year by clicking the play button on the audio player below.)

Do you think some of your friends would enjoy reading Cadel – An Aussie Legend? Please use the buttons below to share the post. Thanks.