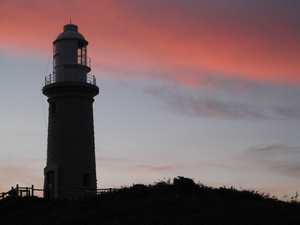 The sun has set on another Rottnest holiday.

We took the 2:00 p.m. ferry from Rottnest back to Fremantle on Monday. I had woken up on Monday morning in pretty bad shape. It was a particularly nasty gastro bug which had me feeling the worst I’ve felt in a very long time.

The thought of an ocean crossing, even a short one, didn’t thrill me at all. I managed to shuffle down to the jetty and pour myself onto the ferry.

Thankfully I woke up yesterday feeling a lot better and even better still today.

What a week it was. There were so many mixed emotions throughout the week as good times mixed with sad news.

One of the highlights of the week was a cycling trip to the western tip of the island with Emily and James. It’s a fairly hilly trip but they didn’t complain once. I’m so proud of them. It wasn’t just about cycling, it was about sticking at something hard so that they could enjoy the sense of satifaction that waited for them at the end.

So now I’m back at work and looking forward to Compassion Day tomorrow. I really hope and pray that people across Australia rise to the challenge and sponsor hundreds of children, releasing them from poverty and giving them hope for tomorrow.

I’ve got a lot of stuff to tell you about Compassion tomorrow and I’m certainly looking forward to letting you hear a couple of special reports I’ve put together for the day.

Do you think some of your friends would enjoy reading Farewell Rotto? Please use the buttons below to share the post. Thanks.

Just a quick post for those wanting to stay up to date with the situation in Haiti.

The President named a new Prime Minister yesterday. This AFP news report says that 63 year old Ericq Pierre has been handed the position. I truly hope that the government can move quickly to help the people of Haiti.

Pierre, whose nomination must now pass a vote in parliament, would succeed former premier Jacques-Edouard Alexis, who was forced to resign on April 12 after a no-confidence vote followed food riots that killed six people and wounded around 200.

Now is not the time for token political gestures; it’s time for real action that will put food in the mouths of the Haitian people. I truly hope that this latest move will have real and immediate effects.

Compassion Day on Thursday the 15th of May will focus on making a difference for the people of Haiti.

Do you think some of your friends would enjoy reading New PM for Haiti? Please use the buttons below to share the post. Thanks.

OK … I’m now on a full sized computer and can say a little more.

I’ve also just had 8 hours sleep and so the world is looking a little better.

I had a fabulous start to my trip. We turned up at Perth Airport in plenty of time to catch the 10:45 a.m. flight to Sydney on Saturday morning. That’s when I was told that the flight would now leave at 3:25 p.m. Brilliant.

We headed back out of the airport and spent some family time at McDonalds. I normally wouldn’t want to spend an entire day at Maccas but I needed to stay at least ‘near’ the airport.

Finally my plane left the ground shortly after 4:30 p.m. I arrived in Sydney after 11:00 p.m. and managed to find my way to the hotel where the rest of the team had had a lovely dinner and a briefing on our upcoming trip. Oh well … I was there at least.

The next morning we got Sydney International Airport and got on board for a thirteen and a half hour flight to Los Angeles. I now know how battery hens feel. Crammed in for that length of time isn’t such a good idea.

I love the way that they help you adjust to the time zone you’re going to. We were on the plane and left Australia around 10:00 a.m. on Sunday so a while after take off we were given lunch. Sometime after that came a snack. A few hours later we were eating breakfast. Hang on … where did dinner and a good night’s sleep go?

It was an early arrival in LA but not quite early enough. Our connection with flights for the Miami plane was already going to be tight but an extra delay on our flight leaving Sydney meant that upon arrival we had to dash through customs and then just keep running to head for the Miami plane. It was a real accomplishment to finally sit down on the plane, even if it was the last row of the aircraft which came complete with stale lavatory smell.

Last night there was an amazing electrical storm. It was great to be able to watch it out of our hotel window but not so great to think that our two hour tour of Miami today will be under rainiy conditions.

This afternoon the real part of our trip begins. We’ll be flying into Haiti and we start visiting Compassion projects tomorrow morning. There’s an amazing itinerary planned for us, visiting several projects and interacting with the local staff and children. I’m really looking forward to being able to share more about the trip with you soon and to be able to show you some photos.

Despite a few hiccups here and there I’m having a wonderful time and am looking forward to all that the next fesw days hold.

Do you think some of your friends would enjoy reading The story so far? Please use the buttons below to share the post. Thanks.