RetroRadio is a series of posts of radio interviews from my time working at 98five Sonshine FM covering everything from issues of spirituality to chats with visiting musicians and celebrities.

Hopefully, the interviews spark a few memories and a few thoughts.

These days he’s the newest coach on hit television show, The Voice Australia, but since bursting onto our screens and winning the first series of Australian Idol back in 2003, Guy Sebastian has amassed an amazing list of accomplishments.

He has performed alongside and in front of some of the biggest names in the music business, won a swag of awards and was Australia’s representative at the 2015 Eurovision Song Contest.

Back in my radio days, I had a number of opportunities to chat with Guy. Here are a couple of those interviews.

Many of those musicians wrote and recorded the original versions of the songs on the album with the likes of Otis Redding, Sam & Dave, Al Green and Wilson Pickett and were members of the MGs, playing with Booker T, and the Blues Brothers Band. Steve Cropper, who co-wrote In The Midnight Hour, Knock On Wood, and (Sittin’ On) The Dock Of The Bay, also produced the album with Guy.

I remember having a representative of the record company in the studio during our interview. She gasped when Guy revealed that some of those giants of the industry would be his backing band for a tour early in 2008.

The only downside of having Guy live in the studio was that he had a terrible flu, which I then managed to catch.

Listen to what he had to say about his music all those years ago using the media player below.

In October 2009 I had the opportunity to catch up with Guy again. Once again we talked about his musical journey and his album at the time, Like it Like That.

Just click play and enjoy another catch up with Guy Sebastian.

[Note: All RetroRadio interviews on RodneyOlsen.net are a snapshot of the time they were recorded. We all grow and change and so the opinions and thoughts of those in the interviews at the time of recording may or may not necessarily be the same as they are today.]

Do you think some of your friends would enjoy reading RetroRadio – Guy Sebastian? Please use the buttons below to share the post. Thanks. 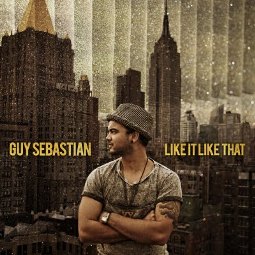 This morning during my radio programme on 98.5 Sonshine FM I had the opportunity to speak to Guy Sebastian, a singer/songwriter who first burst into our loungerooms back in 2003. His incredible talent has ensured an ever growing fan base and impressive album sales.

ARIA recently announced that his debut single from 2003, Angels Brought Me Here, was the number 1 single of the decade.

On his most recent album, Like It Like That, Guy seems to have truly found his own voice and style and has set himself up for an even brighter future.

The title track was the first single from the album and it stayed in the top ten for eleven weeks and still seems to be everywhere.

The second single, Art of Love, was a very tasty duet with Jordin Sparks.

The third single, All to Myself, has recently been released. It’s one of my favourites from the album … but then most of the tracks on the album are favourites of mine.

Click the play button on the audio player below to listen to our conversation.

Do you think some of your friends would enjoy reading Talking to Guy Sebastian? Please use the buttons below to share the post. Thanks.

Geelong born country music singer Adam Harvey has worked as a truckie and a goldminer. Since those days he’s certainly struck gold with a swag of golden guitar awards.

His amazing voice was on display for a wider audience when he took part in Channel 7’s It Takes Two in 2008.

Adam has achieved one of country music’s ultimate dreams by performing at the Grand Ole Opry, yet he’s still a very down to earth person. He even dropped in to his local primary school a couple of months back to sing Christmas carols.

He’s travelled west this week to take part in tomorrow’s Hope from Ashes Toodyay Benefit Concert and he joined me in the studio this morning as part of my programme on 98.5 Sonshine FM. It was a true delight to chat with Adam and thankfully he brought his guitar to perform standout acoustic versions of Stuck in the Middle and King of the Road.

You can listen to the interview by clicking the play button on the audio player at the bottom of this post.

Do you think some of your friends would enjoy reading Talking to Adam Harvey? Please use the buttons below to share the post. Thanks.

It’s provided some great television over the years and highlighted some excellent talent but it seems that the good times are over for Australian Idol.

News.com.au is reporting, “Australian Idol will be the first TV casualty of the year, with the former ratings juggernaut to be ‘rested’ for 2010.”

3.34 million people sat glued to their televisions when Guy Sebastian won the premiere series in 2003. Just 1.4 million viewers watched Stan Walker’s walk away with the title of Australian Idol in the 2009 finale. A drop of almost two million viewers would suggest that Australia has lost interest in the talent show.

The series has certainly had its critics but there is no denying that the show has brought some extremely talented performers to our attention. Guy Sebastian’s first single, Angels Brought Me Here was recently named as Australia’s highest selling song of the decade. You might put that down to the hype surrounding the first series of Australian Idol, but that can’t explain the fact that his recent hit, Like It Like That, was the highest selling Australian artist song and 6th highest selling song overall in Australia in 2009. Like It Like That is also being used in a number of US television shows. Six years later and Guy is still selling CDs by the truckload.

The series has had its ups and downs and not all series winners have gone on to bigger and better things but even finalists who didn’t reach the final few have continued to make a mark on the entertainment world to varying degrees.

No official announcements have been made yet and those closest to the show are still refusing to confirm anything. Though it would seem unlikely that we’ll see Australian Idol on our screens again, no one has ruled out a come back.

“They have asked (production company) Fremantle (Media) for ideas on how to relaunch in 2011.”

Channel 10 refused to comment and Fremantle did not return calls yesterday. – News.com.au

I’ve certainly enjoyed chatting to many of the people involved in the show on my 98.5 Sonshine FM morning radio programme including judges Dicko and Marica Hines as well as contestants such as Guy Sebastian, Cosima, Paulini, Damien Leith, Dean Geyer, Chris Murphy, Natalie Gauci, Carl Riseley and Wes Carr.

There have been some wonderful moments over the years but it looks like the journey is all but over. We’ll miss Australian Idol but thankfully we can still enjoy some great music that we would never have heard if the series had never made its way to our living rooms.

Do you think some of your friends would enjoy reading Australian Idol not returning in 2010? Please use the buttons below to share the post. Thanks.

He’s just turned 28 and his music keeps getting better. I’m sure it’s only a matter of time before he breaks the lucrative US market.

You’d have had to be living under a rock in Australia to have not heard of Guy Sebastian. From his rise to fame on the first season of Australian Idol to his recent, incredible, number one single Like It Like That, he’s certainly enjoyed the popularity his talent deserves.

But in the US it’s a different story. Guy recently found himself playing to a room of just eight people in a bar in New York.

I played a residency in that bar for a month, and no one had any idea who I was, but it grew from a few people to a few hundred people. The whole experience of doing that has been so satisfying. It’s been really good for my soul.

I spoke to him this morning during my radio programme on 98.5 Sonshine FM about the runaway success of his current single, Like It Like That, and about the album of the same name. You can hear the interview by clicking the play button of the audio player at the bottom of this post.

I had the privilege of seeing Guy in concert some time back when he toured with the likes of Steve Cropper and Donald “Duck” Dunn in his band. The respect he receives from such musical greats reinforces his reputation as an extremely talented musician, singer and performer.

I’m sure that the best is yet to come from Guy Sebastian but it’s still hard to imagine how he’s going to top his wonderful new album. It’s certainly going straight to my iPod.

Guy Sebastian’s new single, ‘Like It Like That’, has reached the number one position on the National ARIA singles chart, the national radio airplay chart and it has also reached the number one position on the digital iTunes chart. This is Guy Sebastian’s fourth chart-topping single, making him the only Australian Idol participant to have achieved such a feat. This result sees Guy Sebastian as Australia’s third best single chart topper this decade after Kylie Minogue and Delta Goodrem. Guy Sebastian comes in second to John Farnham for the most number one ARIA singles in history for Australian solo male acts.

Guy will be touring Australia in February before returning to the US to let the world know just how good he is. You can keep up to date with what he’s doing at his website.