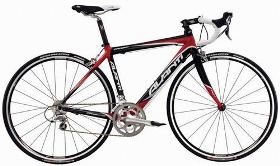 It seems that more Aussies are taking to the roads on two wheels. For the ninth consecutive year Australians have bought more bicycles than cars. I take pride in that statistic, especially seeing that I was one of those who bought a new bike in 2008. (Mine’s just like the Avanti Cadent 1.0 in the picture.)

While fuel prices have taken a temporary tumble, they’re sure to rise again and by the time you factor in all the associated costs, driving is still an expensive habit.

We’ve been a one car family for many years now and we save a huge amount of money due to the fact that I commute by bicycle. I’ve especially enjoyed the past couple of months since the radio station moved to new premises. My new cycle commute has me pedalling three times the daily distance and I’m loving it. I’m feeling healthier by the day.

In a News.com.austory titled Bicycle sales rise in Australia, we’re told that Australia is still experiencing a boom in bicycle sales.

That far outstripped the 1 million auto sales over the same period.

Climate change and a bigger focus on health are just a couple of great reasons to get out and ride. It’s time to rediscover what we’ve always known; cycling is fun.

Do you think some of your friends would enjoy reading Bicycles continue to outsell cars? Please use the buttons below to share the post. Thanks.

You might think you’re making New Year’s Resolutions but are you really just compiling a wish list?

Did you make a well intentioned list of resolutions at the start of 2008 which have failed to bear fruit? Could you take last year’s list and simply change the 2008 on the top of the list to 2009?

How do you make resolutions that work? What’s the difference between New Year’s Resolutions and a wish list?

I’ve had an Amazon Wish List for quite some time. It’s a list of things I’d like, but simply listing those things doesn’t mean anything unless I, or someone else, decides to take action and buy someting from the list. The stuff on the list now is the same as the stuff that was there when I created it. Wishing doesn’t make it happen.

If I say that I want to lose weight in 2009 that’s a wish. If I set out a sensible weight loss strategy with achievable short and long term goals though the year it’s a resolution.

If I say I’d like to make family time more of a priority this year, it’s a wish. If I book time in my diary and plan to give up activities that would otherwise get in the way of that happening, that’s a resolution.

If I say I’d like to read more over the next twelve months, that’s a wish. If I select some books, create a reading plan and then move other activities out of the way to give me the time to read, that’s a resolution.

Resolutions need a concrete action plan with achievable, measurable goals. It can also be helpful to find someone who will keep you accountable to your goals. Maybe there’s someone with a similar goal or resolution who will work with you so that you can both achieve your plans. It might be someone who is already doing well in an area in which you’d like to improve. Ask them to help keep you moving towards your goal and to give you any advice you need to get there.

The other thing to keep in mind is that if we’re making lifestyle changes we’ll probably fail now and then. The aim is to keep going rather than just throwing in the towel the first time you trip up. Even if you don’t reach your goals at the set time, you’ll still be further down the track if you get up after a setback, dust yourself off, and start moving in the right direction again.

If you are going to see 2009 as an opportunity for change you might like to break down your resolutions into various categories such as Health and Fitness, Spirituality, Family and Relationships, Finance, Career and other areas that touch your life.

Do you think some of your friends would enjoy reading How to make resolutions that work? Please use the buttons below to share the post. Thanks.