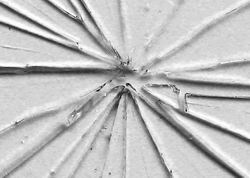 I’ve got a great idea that could help our environment. We already recycle so many things but I’ve found a wonderful resource that seems to be completely untapped at this point.

If we want to recycle more glass products I’d suggest sending someone with an industrial strength vacuum cleaner up to the bike path that runs alongside Hepburn Avenue in Perth’s northern suburbs.

I needed to go to a meeting in the suburb of Kingsley a couple of afternoons ago. As I cycled along I could hardly believe the amount of broken glass on the cycleway. The mind boggles at how so much glass could find its way there. Are people doing this on purpose because they don’t like cyclists? Are the locals particularly clumsy? Is it simply an accumulation brought on by the fact that the local council has never bothered to clean the pathway?

I did my best to dodge the very frequent patches of shattered glass but I eventually found another way to collect the glass other than the industrial strength vacuum cleaner. I was about to cycle to work yesterday morning and found a small shard of glass in my back tyre. It didn’t slow things down too much. A quick tube change and I was on the road again but I could have done without it. I’m actually amazed that I didn’t collect even more pieces.

Do you think some of your friends would enjoy reading Collecting Glass? Please use the buttons below to share the post. Thanks. 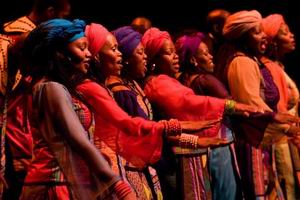 Many people consider South Africa’s Soweto Gospel Choir to be the most exciting group to emerge in world music in recent years. That claim is backed up by the fact they’ve won two Grammies.

The Choir’s repertoire reflects their faith and spiritual journey. Their latest show, African Spirit, is sung in six different languages.

Since the choir’s first international performances in Australia in 2003, Soweto Gospel Choir has become a worldwide phenomenon, performing sell-out concerts across the world and singing alongside superstars including Bono, Queen, Annie Lennox, Diana Ross, Jimmy Cliff and Celine Dion, Red Hot Chilli Peppers and others.

They’re in Perth for four concerts. Pauline and I were privileged to be in the audience for the first of those concerts last night at His Majesty’s Theatre.

It was a real pleasure to welcome a number of representatives from the choir to the studio this morning during my morning radio programme on 98.5 Sonshine FM. I had opportunity to talk to a couple of members and enjoy a live performance in the studio.

You can hear the interview by clicking on the play button of the audio player at the bottom of this post.

It was fantastic to hear them talk about their faith and the opportunities they have to talk about spirituality to such diverse audiences.

Do you think some of your friends would enjoy reading Soweto Gospel Choir in Perth? Please use the buttons below to share the post. Thanks.

A great example today of why we shouldn’t base our judgements on appearances.

A Perth family from the suburb of Shelley ignored a plain, brown paper bag for several days. It sat on their front lawn, ignored by the wife who first spotted it and her husband who also thought nothing of it.

When the son decided to peek inside he found the bag contained $10 000.

News.com.au reported the find in their story Family finds $10 000 cash on front lawn. The police are now trying to find the owner of the cash.

The man who found the money took it to Cannington police station yesterday, a police spokeswoman said.

He told officers his wife spotted the bag a few days ago on the front lawn of their home at Shelley, in Perth’s south, but they thought nothing of it until their son looked inside.

I wonder how many times we ignore those things that seem plain and ordinary and miss out on something valuable.

Do you think some of your friends would enjoy reading Appearances can be deceiving? Please use the buttons below to share the post. Thanks. 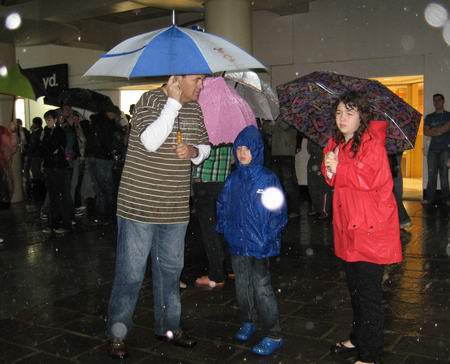 Time stood still in the centre of Perth today.

On a day when rain bucketed down, strong winds buffeted the metropolitan area and thousands of homes were left without power, a group of locals headed into the middle of the city to take part in a time freeze.

The idea was to meet for a briefing in Northbridge before heading into the Murray Street Mall for the freeze. Right on midday, with a quick blast on an air horn as a signal, the assembled masses suddenly froze positions.

After three minutes there was another blast of the air horn and everyone just moved off.

Emily, James and I took part while Pauline took photos. I was giving last minute instructions to the children when the horn went off, so that’s how we stayed for the next three minutes.

The video shows the whole episode. It’s not as clear as it would have been if Perth had put on one of it’s better weather days. You can see people moving around for the first 90 seconds of the video then you see those taking part suddenly freeze.

I scanned the crowd as much as I could but I didn’t spot anyone older than me. At 44 I reckon I was the oldest participant. There was another family involved with younger kids than ours.

My only disappointment, well OK, apart from the weather, is that I didn’t get to see the reactions of those passing by but I’m told that it was very effective with many people wondering what had just happened. I’m guessing my the sound of screaming in the video that at least one child found the whole thing a bit overwhelming.

Do you think some of your friends would enjoy reading Perth Time Freeze 2008? Please use the buttons below to share the post. Thanks.

You don’t get the true legends of soul music travelling half way around the world to serve as a backing band for someone unless they’ve proven that they have enormous talent.

Pauline and I went to the Perth Concert Hall on Saturday for the final show of Guy Sebastian‘s Memphis Tour. His touring band featured members of the legendary MGs.

You might know Steve “The Colonel” Cropper and Donald “Duck” Dunn from the Blues Brothers movie or from their work with Booker T and the MGs. Steve Cropper co-wrote songs like Dock of the Bay with Otis Redding as well as co-writing classics like Midnight Hour and Knock on Wood.

They brought fellow Memphis musicians, Lester Snell and Steve Potts with them to Australia and rounded out the band with some amazing Australian musicians.

They performed songs like Soul Man, Hold On I’m Coming, Hard To Handle, Under the Boardwalk, Lets Stay Together and finished up with a fantastic version of Shake Ya Tail Feather.

A highlight for me was when the band gave us a very tasty rendition of the Booker T and the MGs classic instrumental, Green Onions.

I’ve been to dozens of concerts and seen some of the world’s best performing and I’d have to say that this concert would be up there with the very, very best of them. When you get a band like that together the music is never in doubt. Match that level of musicianship with the extraordinary vocal talents of Guy Sebatian and you have an act that would impress audiences anywhere in the world.

If all you’ve ever seen or heard of Guy is his Australian Idol performances and his pop hit singles, as impressive as they are, you haven’t even begun to discover just how good he really is.

I interviewed Guy on 98.5 Sonshine FM back in October last year about The Memphis Album and about the upcoming tour. Back then he revealed that the MGs would join him on tour for the first time on Perth radio. The picture in this post was taken at the time of that interview. You can hear about his experience recording the album and working with the legends of soul music by clicking the play button on the audio player in this post.

Do you think some of your friends would enjoy reading Guy Sebastian proves he’s the real deal? Please use the buttons below to share the post. Thanks.