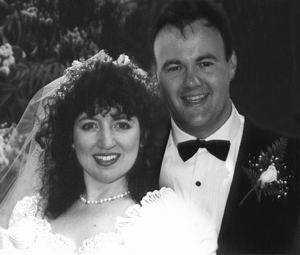 Pauline and I met in the January of 1992 and were married in the December. Once we got engaged, half way through the year, we couldn’t stand the thought of having to wait until ‘next year’ to be husband and wife, so we picked a date in the last month of the year and started planning.

I’m still hopelessly in love with Pauline and plan to stay that way for the rest of my days.

I told the story of how we met quite some time ago on this blog and figure that on a wonderful day such as this, it’s worth repeating.

Around December 1991 and January 1992 I was spending a bit of time with a young lady . She was invited to a big picnic event at the Claremont Showgrounds by a friend. My friend asked if she could bring someone else. The someone else was me.

On the day of the event, I picked up my friend and we headed over to pick up one of Pauline’s sisters, who was the person who’d invited us. We got to Pauline’s parents’ home and were invited in.

I met Pauline in her mum’s kitchen. She was, and still is, incredibly beautiful. I was gone right from that moment.

Pauline and her mum were looking at photos from a family wedding they had recently been to in Queensland. I thought that the photos must have been from Pauline’s wedding and I thought, “I’m too late”. After quickly checking Pauline’s ring finger I realised that wasn’t the case. I thought at the time that it was probably inappropriate to be thinking that way. As I mentioned before, the lady I was there with was only a friend but it did seem like bad form to be so absolutely distracted.

Together with my friend and Pauline’s sister, I got in the car and we headed off.

Meanwhile, Pauline and her mum, who were heading to the same event, got in another car and started towards the showgrounds. Apparently Pauline said something in the car to her mother to the effect that it was a shame that all of the good ones were taken. Pauline obviously hadn’t checked my ring finger and thought that I was a married man. Her mum told her that my friend and I weren’t married and in fact, as far as she knew, we weren’t even an item.

We managed to catch up at lunchtime at the showgrounds and chatted for a little while. I was smitten to say the least.

It actually took another couple of months for us to get together but once we did we started talking about marriage very quickly. By the middle of the year I was convinced that I was not just in love but that I was prepared to commit my life to Pauline, to love her no matter what for the rest of our days. I asked, she said yes, we got hitched.

Seventeen years later and my love continues to burn brightly for my incredible bride.

Happy 17th Anniversary to the most wonderful woman I’ve ever had the pleasure of knowing.

Do you think some of your friends would enjoy reading Saying "I Do" in '92? Please use the buttons below to share the post. Thanks.